I have a Lenovo TAB 8 which my wife uses mostly by playing Wordament on it.

As a tech savy person I bought the Android tablet to get to know the OS better and to see myself the fuss about it.

I bought it late last year or early this year – can’t quite remember. It came with Android 4.2 (Jelly Bean) and it upgraded to 4.4.2 (Kitkat) during the first months of use, but that’s it.

I have and iPad second generation and it has been updated to the latest iOS 9.2. This is nice, I still can see what’s new and better (or worse) with the lates Apple software without buying a new iPad.

Article from today at betanews, which was based on the report from G Data said that 80% of Android devices are still running outdated versions of the OS. I’ve acknowledged this before, but I thought that the percentage would have been a bit better now.

Jelly Bean (Android 4.1 – 4.3) is the most common one, almost 37% of devices is running this version. Even Kitkat or Lollipop can not come close. When added together, only then yes. 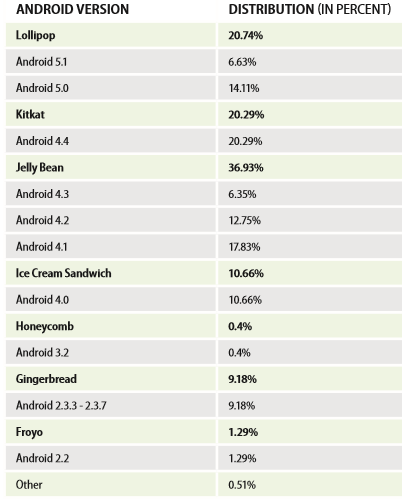 In my TGIF-48 I told about the unfairness to Samsung Galaxy Tab users, a flagship tablet from early last year will not be updated to the newest version of Android, Marshmallow.

Why? Is this so hard for Google to take into control? Is this the reason of OEM’s who want to modify the OS to their devices? Is the hardware so crap it cannot be upgraded to the latest OS? Is this the price to pay for “free”? I think Google should control this somehow, it is their brainchild. They should control the updates of the OS and not the OEM’s.

Apple and Microsoft are doing it right, users can update their OS. Of course this cannot be “forever” as hardware gets better and some new functionalities may come along that require hardware specific stuff for the OS and then the four to six years old devices are a bit outdated. But this is natural.

But surely this should not happen when the device is less than two years old.

The short report was interesting for another reason as well;

But you can read it fully here.

A report from Xerox (The State of Customer Service 2015) indicates that 51% of consumers are comfortable of buying into a single brand ecosystem (source betanews). I can believe this, it makes life easier. That’s why I love the Microsoft ecosystem.

Microsoft and Apple can give this comfortable ecosystem, but Google cannot fully. Oh, of course there are Google docs, Gmail, other services etc., millions and millions of devices, but at one point it fails if the OS is outdated too widely.

Google is a great company, but please get grip of yourself with Android. Make our life easier.