You may have heard about the “Pyramid Flipper” that has been written about all over the internet. No? Ok, back to the basics then. Project name “Pyramid Flipper” is the brainchild of an Finnish company called Eve-Tech. Behind the company are a bunch of young but highly professional folks that have a wide experience of designing and producing tech devices.

Their first device was the EVE T1, which I bought the day it came available. It was an 8 inch Windows tablet with 2 GB RAM, 64-bit processor and with an eye melting screen as they said. There are three big things that I love about that device; 1) that it is an 8 inches Windows tablet and 2) has a built in GPS and 3) the low price.

When it came out, it had the Windows 8.1 operating system but was upgradable to Windows 10 and yes, also as an Windows Insider I have installed all the latest builds on it. It is a superb small tablet. I wrote about it earlier in this blog.

In 2015 Eve-Tech started the design of a new device and I was inivited to be an Eve Insider as they decided that a community of Eve fans would be in the center of helping them to design the new device. Of course I wanted to be part of that. So the community pages opened up and the discussions flourished around the device.

First I thought that the new device would be a new 8 inch Windows tablet but it turned out that we were designing a 2-in-1 device. I love my Surface 3 Pro, but yes I would like to be a part of designing the new Finnish 2-in-1 device and eventually when it comes out I will buy it.

In the Eve Insider WhatsApp discussion board you could wake up one morning to see thousands of messages and to be honest I did not have always the time to look all of them through. Usually it was about a detail on pixels, processor or whatever in a very heated conversation, that did not interest me that much.

For me most important is the design, the overall performance and price. You can add all the latest technological stuff into a device, but I think then the outcome will be also a highly priced device and of those we already have a lot of. And we were not designing the best gaming PC.

The folks at Eve-Tech understood this and their job has not been the easiest one I can tell you. They have been patient in hearing all the “advices” of the community, but then again with the voice of reason they have made their own final decisions. A lot of polls have been conducted and I have casted my vote on every one of them, bearing in mind the overall picture of a high perfomance 2-in-1 device with a low competible price.

Eventually Eve-Tech created a smaller Eve Community Leader group to which I was invited as well and there the discussions have been more interesting and less heated about the smallest detail. All the interesting stuff has been well discussed in that group – allthough I have not that much participated due to my studies. But I have followed it daily. 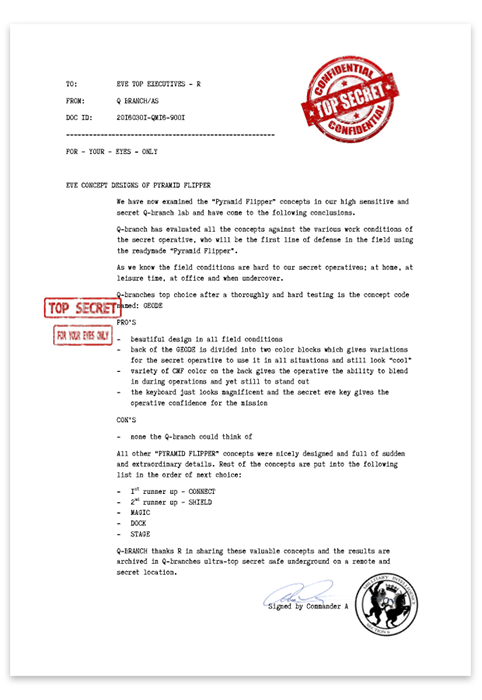 I have tried to bring sometimes a bit humor with my opinions. When the first secret renders of the designs were given to the Community leaders, way ahead of the vast group of Eve Insiders, I gave my opinion in a “secret” James Bond Q-branch style document.

The device is almost ready in design and specs and hopefully pre-ordering will start soon. The new co-operation between Eve-Tech and Mozo, another Finnish company, will bring out a device that can be tuned to users liking and will attract businesses and home users alike.

I know it will be beautiful in design, in performance with an affordable price. So I hope we Eve Insiders and Community leaders have achieved what the folks at Eve-Tech were looking for. I know we have.

What’s next? I believe in the strong ecosystem of Microsoft. Everything works beautifully together. So I would personally I hope that Eve-Tech would start designing a Windows 10 phone for the consumer market, let Microsoft do the business phones with the upcoming Surface phone(s). Great in design, performance and for affordable price.

Yeah, I know that the market share of Windows phones is small, so what? App gap? Well who the hell has millions of apps downloaded to their device? Sure Andorid and iOS have more apps to choose from, but I think almost all of the important ones are for Windows Phones as well. Plus there is a lot of great apps to choose from as well. So it’s not a dead dried water well.

The latest number of installed Windows 10 was over 350 million closing to almost 400 million, so there is already a huge market for all kinds of Windows 10 Universal apps (which would work also in Windows 10 Mobile phones, Xbox and HoloLens) and companies should be aware of this when creating apps not only for Android and iOS – is to understand that the 2-in-1 market was greatly started by Microsoft and it’s Surface devices and now all other OEM’s are bringing their great 2-in-1 devices into it. That sement is growing as well as the adaptation of Windows 10. Even Dell announced that it will discontinue their Andorid tablets to concentrate on the Windows 2-in-1 devices.

One more thing would be great when the new “Pyramid Flipper” comes to market. Each “Pyramid Flipper” would have an EVE Windows Universal App pre-installed for gathering feedback, sharing stories from the users of the device. It could give help, tips and advice to the user and what else you could think of that would be beneficial to the user and Eve-Tech. This could be something to think about at the design tables of Eve-Tech.

But it has been a great journey in the community and with the folks from Eve. Even though I have never met the guys personally, they have become friends.

Let’s keep the motion rolling for great devices from Eve today and in the future.